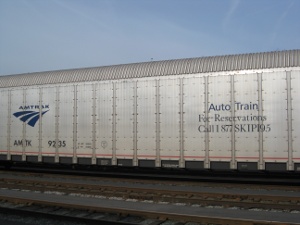 For the past few years, my brother and sister-in-law have invited us to visit them at their winter retreat halfway down the east coast of Florida. This year we decided to take them up on it. They'd taken the Auto Train down in the fall, and raved about it. The price of a round trip in mid-March was roughly the same as flying and renting a car for the week, so we booked our trip.

The day of departure did not begin auspiciously: while reading my morning email, I saw a notice from Amtrak that the northbound train was delayed, which would cause our southbound train to be delayed (there are only two trains in service; see below). Our train ended up departing at 8 PM, almost four hours late. On the positive side, that gave us a couple extra hours to explore the area before departure.

To ride the Auto Train, you must bring your automobile (or motorcycle). If you want a long train ride without having your car, Amtrak runs several daily passenger-only trains over the same trackage. Those trains have the benefit of extending to New York City on the north side and Miami on the south; the car carriers limit where the Auto Train can go.

There are only two passenger stops: Lorton Virginia in the north (a half hour south of Washington, DC), and Sanford Florida in the south (a half hour north of Orlando). There's also a midnight maintenance stop in Florence, SC; no passengers board or depart the train, but smokers can step onto the platform to satisfy their addiction.

The route generally follows Interstate 95, at times running within sight of the highway (which explains the “call 1-877-SKIP-I95” painted on the side of the car carriers). It's advertised as 17 hours for 850 miles, or an average speed of 50 mph (including stops). However, Amtrak doesn't own the tracks, and they're generally used for freight traffic; there are many places where the train will slow down due to traffic ahead.

As I mentioned before, there are only two trainsets: while one heads north, the other heads south. At each endpoint the vehicles and people are unloaded, the train cars are cleaned and restocked, and the coach seats are rotated to point in the direction of travel. On a normal day, this occupies the time between a 9:30 AM arrival and a 4:00 PM departure.

But if things go wrong, there isn't another train ready to take over. A long delay, such as on our departure day, will have ripples that last for several subsequent trips. In retrospect, we were actually lucky: there were in fact spare car carriers at Lorton, so we didn't have to wait for the arriving train to unload. The passengers waiting in Sanford for our train weren't so lucky; this time of year, there are more cars going north (in fact, for our return trip, there were nearly as many cars as people).

Cars ride in 18 foot tall double-deck “autoracks,” which can carry 8–10 automobiles each. While the car carriers are fully enclosed, there there are gaps between the panels (especially the ends and roof). This lets a lot of dust and pollen in; don't bother washing your car before the trip, because you'll want to do so at the end.

There are a range of accommodations for passengers, from coach seats to private bedrooms with en suite bathrooms (these feature showers as well, but be aware that the shower stall and toilet stall are the same; using the shower will leave you with a wet toilet). In Amtrak parlance, the train is made of SuperLiner cars. 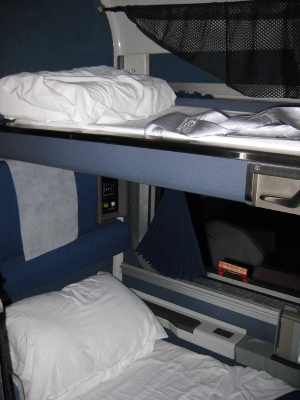 For the ride down, we had a “roomette.” During the daytime, this is a private compartment with two seats that face each other, a sliding door, and a curtain so that other passengers can't look in. At night the seats convert into the lower bunk, and the upper bunk folds down from the ceiling. The lower bunk is comfortable, and has the window; the upper bunk is somewhat cramped, with netting to prevent its occupant from rolling out as the train sways over bumps and switches.

The key feature of a roomette is its (lack of) size. When we were packing for the trip, I noticed that my wife had both a daypack and a rolling bag (this is a woman, who, when we met, could pack for a week using a small backpack, including evening dress). I told her that the room was about the same size as our dining room table. She thought I was exaggerating, but agreed to take only one carry-on. This was a very good thing, as there is no place to stow bags when the bunks are unfolded; we had to strap it to the wall under the coat rack.

For the trip back, rooms were significantly more expensive, so we rode coach. The coach seats are comfortable, approximately the same width as domestic first class on an airplane (if you're used to Amtrak's Northeast Corridor trains, the seat width is similar). The seat pitch far exceeds what you'd find on a domestic flight: 3–4 feet between seats. The seats themselves recline to about a 45 degree angle, with fold-up leg rests and a fold-down footrest on the seat in front. Overall, more comfortable for two people than the roomette.

There is a downside to coach, and that's the other passengers. To be blunt, the majority of passengers are elderly and hard of hearing; conversations tend to carry. They also spend a lot of time on their cellphones. This is a generation that grew up with a phone in every home and relatively cheap rates; they like to talk on the phone, and cellphones simply extend that paradigm from the home to the rest of the world. With nothing else to do but look at the scenery, they're always on the phone. Making things worse, they're technically challenged, so haven't disabled audible keypress feedback; at times we were surrounded by a cacophony of beeps.

You can request a seat in the “quieter” car, but this simply means that the staff tries not to put children there. If you're used to the “quiet car” of the Northeast Corridor trains, this isn't it. Invest in a good pair of noise-attenuating headphones or bring earplugs. 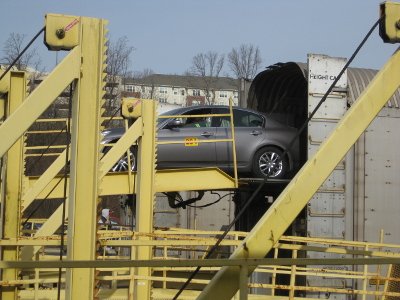 When I was researching this trip, I couldn't find information about what to do between the time that you hand over your car and the time that the train departs. This article exists, at least in part, to rectify that.

The Lorton station is, as I said, about a half-hour's drive south of Washington DC. It is adjacent to I-95, and it's easy to confuse the access road and the highway ramp, especially if you're coming from the north and crossing under the highway. The northbound ramp is a large intersection with lots of signage, while the access road is a tiny intersection immediately after it, just before the railroad overpass.

Important tip: you can go to the station to check in without handing over your car; keep left on the station access road. If you want to ensure a particular seat or dining time, arrive early and plan to do something else before boarding. There's a rumour that dropping your car off early means that you'll get it later at the other end, but I think it's just random chance.

There's a strip mall near the station — a minute or two driving, maybe 10 minutes walking. You'll find a bank there, along with a supermarket, some fast food restaurants, a sports bar, and an Indian restaurant. We ate at the sports bar for lunch, and (because the train departed so late) went to the Indian place for dinner. Both were good, but I preferred the Indian restaurant.

If you choose to walk to the strip mall, you'll need to walk along the station access road; there isn't a sidewalk. There is, however, a sidewalk on both sides of Lorton Station Road (VA-642, the four-lane highway that separates the station and strip mall), as well as crossing lights at the intersections. I'd recommend staying on the north (station-side) sidewalk, as it means fewer crossings.

There is also a shuttle bus to the nearby town of Occoquan, with additional restaurants and specialty shops. Since we didn't need to check our car until 4, we drove there; it's about 10–15 minutes from the station.

On the southern end, Sanford station is a mile or two outside the town proper, in a largely residential zone. Unlike Lorton, we had to check our car right away; there wasn't a bypass lane. However, there's a free shuttle bus to the Sanford historic district.

The shuttle drops you at the visitor's center on 1st and Seminole, and you can leave your bags there while you explore the area. The last bus from the historic district leaves at 2:30, and gets you back to the station just as the train is boarding.

There are several restaurants in the historic district or a short walk away, as well as galleries and antique shops. We went to the Taste of Thyme Cafe, a small (three table) lunch, breakfast, and ice cream shop a block or so away from the visitor center; I'd recommend it.

If we go back to Florida, I think we'll fly. The train was a pleasant experience, even with the delay heading southbound. And it was nice to have our own car: we could pack for a range of activities, and had the space to bring home nearly a bushel of citrus. And there's something to be said for going to sleep in late winter and waking up in spring.

But, when you get right down to it, taking the train meant two travel days in each direction. Yes, most of the journey happens at night. But you have to be at the station by mid-afternoon of the first day, and won't get your car until noon of the second day. Add travel time to get to and from the station, and that takes the rest of those days (we live in Philadelphia, which is about three hours from Lorton with good traffic, much longer if you hit the Beltway at rush hour).

That said, train travel is far more enjoyable than commercial air travel. If I had the time — especially if I was planning to spend weeks or months in Florida — I would definitely take the Auto Train. But I'd spend the extra money to get a full-size bedroom.

This site does not intentionally use tracking cookies. Any cookies have been added by my hosting provider (InMotion Hosting), and I have no ability to remove them. I do, however, have access to the site's access logs with source IP addresses.